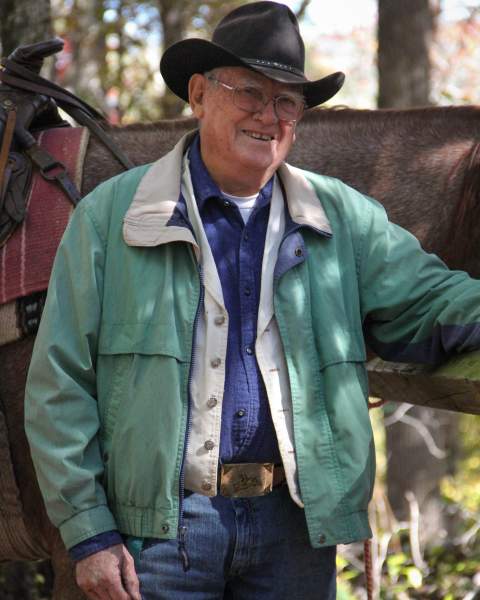 Butch grew up in Eutawville, SC and was the son of the late Yates Kennedy and Antoinette Dukes.  Butch was an experienced horseman who worked with horses all of his life. Growing up Butch exercised thoroughbreds at multiple east coast racetracks, rode saddle broncs, bulls, jousted, played polo, and trained many horses.  Not long after graduating from Clemson College in 1962 he became the Clemson Sheep Farm Manager and brought the first horse to the farm which is now known as the Clemson Equine Center.  During the time he was Farm Manager he created the majority of the trails in the Fants Grove area with the Block and Bridle Club.

In 2000 the trailhead behind the Garrison Arena was named the Butch Kennedy Trailhead.  He worked creating and mapping trails for several years with the SC Forestry Service after retiring from Clemson. He was instrumental in trail management not only in the Fants Grove area but also at Rocky Gap Trail System at Whetstone/Earls Ford.  He truly had the heart of a servant with the countless hours of trail work to ensure that the Fants Grove Trails were passible and safe for the Equine Community.  In 2000 he was awarded the inaugural Order of the Stirrup which is at the same level as the prestigious Order of the Palmetto.

Other than horses, he enjoyed leatherworking, and blacksmithing. He was an active member of the SC Upstate Equine Council, SC Horsemen’s Council, was a founding member of the Pendleton Area Saddle Club and a longtime member of Pendleton United Methodist Church.

Surviving are a son, Sid Kennedy (Shea); daughter, April Haynes (Harvey) both of Pendleton; grandchildren, Tyler Haynes (Alysa) and Alex Haynes (Jamee); and great granddaughter, Olivia Haynes; brother Tommy Dukes, of Greeleyville; and a sister, Jean Keefe, of Florence. In addition to his parents, he was predeceased by his sisters Beverly K. Langmo and June A. Wood.

Funeral services will be 2:00 PM,  Sunday, November 13th  at Pendleton United Methodist Church with Rev. Ricky Howell officiating.  Burial will follow in the church cemetery. The family will receive friends immediately following the service in the church social hall.

Members of the family are extremely sensitive to fragrances and request your consideration in withholding the use of perfume or cologne. The family suggests that in lieu of flowers, you consider donating to either Pendleton United Methodist Church, PO Box 646, Pendleton, SC 29670 or to the SC Upstate Equine Council, PO Box 391, Sandy Springs, SC 29677 in honor of Butch Kennedy’s memory.

To order memorial trees or send flowers to the family in memory of Butch Kennedy, please visit our flower store.

Burial will take place following the service. The family will greet friends afterwards in the church social hall.