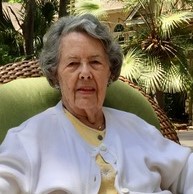 C.B. lived her life with amazing enthusiasm, a great sense of humor, a true thirst for knowledge and lovely Southern charm. Her adventuresome spirit served her well as a faithful Army spouse for many years. She was a well-loved member of the community in every place she lived. Moreover, C.B. was a wonderful, caring and loving mother for her three children. She also deeply loved her four grandchildren and three great grandchildren which gave her so much joy in her twilight years.

C.B. was born in Savannah, GA, the only child of the late Floyd E. and Bertha E. Waite Miller. C.B. grew up in Hinesville, GA; she loved her childhood and was quite fortunate to travel by boat to the 1939 World’s Fair in New York City, NY. C.B. was a voracious reader, thus expanding her imagination, her world well beyond the Georgia Coast. She graduated from Bradwell Institute in 1944 and was the valedictorian of her senior class. C.B then attended Wesleyan College in Macon, GA for three years. However, when visiting her parents in Hinesville, GA, she met the love of her life, Thomas B. Maertens (Tom), who along with other cadets from the junior class of the United States Military Academy were training at nearby Camp Stewart, and the rest was history. Subsequently, C.B. was married initially by telephone so she could then be government sponsored and authorized to move to Japan where Tom was stationed. Alone, C.B. traveled from Savannah, GA to Seattle, WA by train. She then crossed the Pacific Ocean on a three-week voyage to Yokohama, Japan and was married the next day in a beautiful ceremony C.B. and Tom were happily married for 60 years.

As a dedicated Army spouse, she loved to travel and lived in overseas locations to include Japan and Okinawa as well as numerous stateside locations to include Fort Benning, GA; Fort Leavenworth, KS; Bethesda, MD; Springfield, VA; Washington, D.C.; Fort Jackson, SC; Fort Richardson, AK and Seneca, SC where C.B. and Tom spent nearly 30 wonderful years in their beautiful lakeside home welcoming family and friends from all over. C.B. and Tom later moved to the Clemson Downs Retirement Center.

C.B. was a big Clemson Tiger fan and attended many football and basketball games. She was thrilled to have been at the Orange Bowl when Clemson won the 1981 National Championship.
She was a member of Holy Trinity Episcopal Church and participated in numerous church activities over the years.

A memorial service will be held at Holy Trinity Episcopal Church, 193 Old Greenville Highway, Clemson, SC on Tuesday, 14 June 2022 at 11 AM. The family will receive visitors in the Parish House following the service. She will be interred in Arlington National Cemetery, Arlington, VA at a later date.

In lieu of flowers, the family request that donations be made to Holy Trinity Episcopal Church or a charity of one’s choosing.

Condolences can be expressed online at RobinsonFuneralHomes.com

To order memorial trees or send flowers to the family in memory of C.B. Maertens, please visit our flower store.