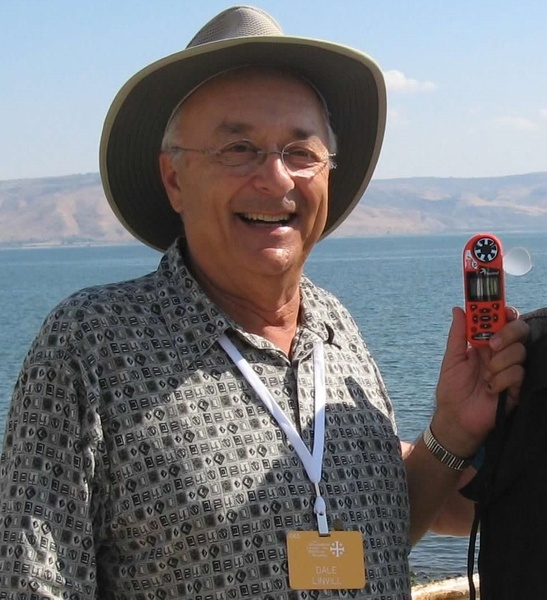 Dale Linvill, active family man, farmer-turned-professor, meteorologist, and lover of big band music, radio shows, and mystery novels, went to heaven on May 13, 2022, hours shy of his 82nd birthday. After living sprightly for years after a cancer diagnosis, Dale’s great big heart just stopped working while he was by the side of his treasured wife of 55 years, Nancy.

Dale was born on May 14, 1940, in Columbia City, Indiana. He grew up working on Linvill Family Farms, established in 1837 in Whitley County, Ind. He graduated third in his class from Churubusco High School in 1958, and was the first in his family to attend college, graduating from Purdue University with a B.S. in physics in 1962. He was proud of the many pancakes he flipped to help pay for tuition.

Dale’s first job was working with electronic microcircuits at RCA in Indianapolis, and it was in this city, as president of the Methodist Singles Group, where Dale met Nancy Herr. The two connected over childhoods spent on farms and soon were married in 1966. They started a family and moved several times as Dale earned a master’s in soil physics at University of Connecticut and a Ph.D. in agricultural meteorology at Purdue University. Dale began his academic career in 1972 as a professor at Michigan State University, then joined Clemson University’s Department of Agricultural Engineering in 1980.

Dale ran the Clemson University Agricultural Weather office and its weather observation records, which have run continuously since 1896.  After retiring in 2004, Dale continued to check the rain gauge every Saturday at LaMaster Dairy Center and perform quality control on weather data. His work earned an Honored Institution award for Clemson University from the U.S. Department of Commerce and NOAA in recognition of 125 years of weather observation in cooperation with the National Weather Service. He served as Clemson’s Faculty Senate President from 2003-2004.

Lots of folks in Clemson knew Dale for his talents and energy. He was a leader in the Clemson Lions Club, sang in the First Baptist Church choir, and was an elder at Fort Hill Presbyterian Church. He was recognized by Clemson Mayor Larry Abernathy for outstanding service to the Board of Zoning Appeals and the City of Clemson. Dale played saxophone for the Orange Jam Band, New Horizons, the Easley Community Band, the Dixie Keys, and the Southern Wesleyan University Band. When his children were in school, he was band booster president for Daniel High School. Dale loved to discuss the weather: he taught meteorology classes for OLLI and gave many colorful interviews for the local news.

Dale was predeceased by his parents, Lawrence Frederick Linvill and Beatrice Viola Kaufman Linvill. He is survived by two sisters, Linda Worrick (Danny) and Johanna Linvill; his wife, Nancy Linvill; and their three children and six grandchildren: Brian and Anna Linvill, Colin and Delaney, of Hillsborough, N.C.; Jennifer and Clarke Scott, Samuel and Ellie, of Alpharetta, Ga.; and Darren and Claiborne Linvill, Sylvia and Amelia, of Clemson, S.C.

A funeral service will be held on Friday, May 20, at 1 p.m. at First Baptist Church of Clemson, and the family will receive visitors at the church after. In lieu of flowers, memorial donations may be sent to Lions Club International (Lions Clubs International Foundation, Department 4547, Carol Stream, IL 60122), Lakes & Bridges Charter School (P.O. Box 1368, Easley, SC  29641) or First Baptist Church of Clemson (397 College Ave., Clemson, SC 29631).

To order memorial trees or send flowers to the family in memory of Dale Edward Linvill, please visit our flower store.