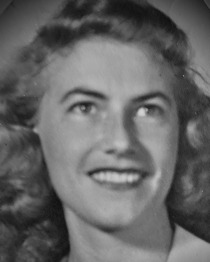 Our dear mother, Doris Robbins McCleskey, age 103, passed away on Tuesday, December 27, 2022, in Greenville, South Carolina. She was born October 14, 1919 in Gordon County, Georgia to Arnold Talmadge Robbins and Elizabeth Dyer Robbins. At age five her mother died, and she was raised by the Franklins of Calhoun, Georgia and on their death by their daughter, Mattie Franklin Hicks (Ma Mattie). Doris was preceded in death by her husband of 76 years, Lamar Duke McCleskey; brothers, Arnold Robbins, Wesley Robbins and John Robbins Williamson; sisters, Marcella Robbins, Bernice Kinman Johnston and Miriam Bowman; son-in-law, James Cleveland Carey.

Doris had a passion for serving and caring for family throughout her life. With auburn hair and hazel eyes, Doris was a beauty inside and out. Everyone she met was instantly her friend. She was foremost a loving spouse, devoted mother, homemaker, teacher, caregiver, and a faithful servant of our Lord. She will be remembered as a wonderful mother who was always there when needed. Doris graduated from Plainville High School as Valedictorian and went on to get a teaching degree from North Georgia State College. Doris met her husband on a double-blind date in Brunswick, GA, where she was teaching elementary school and where Duke was in the Navy for a twenty-year career retiring in Greenville, TN and finally settling in Greenville, SC. They retired to Satellite Beach, FL and Clemson, SC. Duke and Doris loved square dancing and were elected to the Space Coast Square Dancers Hall of Fame. Tremendously intelligent, Doris could work a 1,000 piece puzzle up until she was 100.

“But we remember now in love,

Your life from start to end,

And we’re just glad we knew you,

As Mother, and as Friend.”

The family gives their heartfelt thanks to Doris’ caregivers, Clemson Heritage, Greenville Post Acute and Crescent Hospice who devotedly cared for Doris in the last stage of her life.

A service of remembrance will be held at the graveside at Old Stone Church in Clemson in the spring. In lieu of flowers, the family request any donations may be made in Doris’ memory to Crescent Hospice.

To order memorial trees or send flowers to the family in memory of Doris Robbins McCleskey, please visit our flower store.