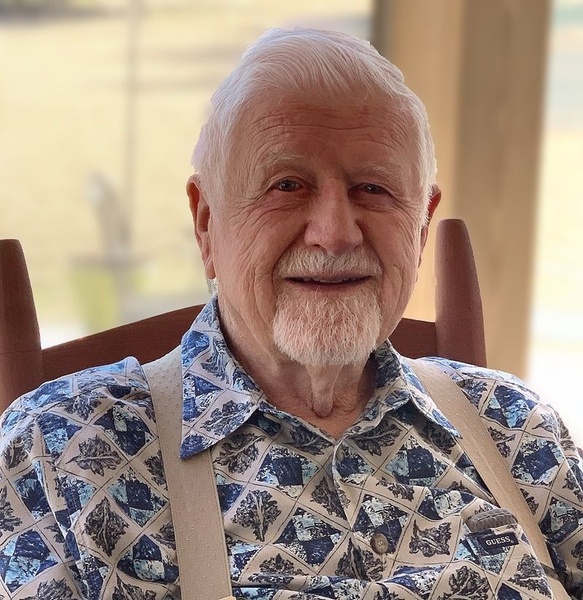 Frank Towers Rice, Sr passed away peacefully in his sleep on Saturday, September 4th. He was born on July 2, 1931 to Gladys Hollingsworth Smith Rice and Ibzan Rex Rice.

Towers was a lifelong resident of Greenville, SC, with a few short stints in other places. He attended Baylor School in Chattanooga, and Georgia Tech. He was on the wrestling team and a member of the Phi Delta Theta Fraternity. He developed lifelong friendships there, and they continued to gather as often as they could through the years.

While at Georgia Tech, Towers attended Marine Officer Basic School. He spent summers at Parris Island, SC, Quantico, VA, and Fort Sill, OK. He was commissioned as a second lieutenant in June 1952. When he graduated in 1953, Towers began active duty, serving in the Mediterranean and at Camp Lejeune. In 1965, he took command of the 57th Rifle Co. serving Reserve Duty. With 130 men under his command, he continued through the Vietnam era. He was a holder of the National Defense, Organized Reserve and European Occupation Ribbons. He retired as a Lieutenant Colonel. One of his favorite sayings was "Not as mean, not as lean, but always a Marine! Semper Fi."

Towers met the love of his life, Betty Claire Fontaine, on a blind date set up by her great aunt and his mother. After a long-distance courtship while she was at Mary Baldwin, they married on June 25, 1955 in Houston, TX. They spent the next 63 years together. They lived in Surf City, NC, Carlisle, SC, and Pensacola, FL before returning to Greenville. For Towers, his family was most important. He attended every sporting event and school/church activity that he could, and he was always willing to help and mentor. In his later years, Family Dinner on Sunday nights was what he looked forward to all week. He loved his lima beans, Duke's mayonnaise and a cold Guinness. He always had a good story or a joke, and his smile was contagious. After Claire's funeral, he was sitting, watching his children and grandchildren as they talked, laughed and played Monopoly together. When asked what he was thinking, he quickly said, "just how lucky I am."

After leaving active duty in the Marines, Towers began a career in construction with Daniel Construction Co. He became interested in prestressed concrete and returned to Greenville to begin his own company. He was a partner in Quality Concrete and later founded Overhead Door, with a partner, in Greenville, Macon, Charleston and Myrtle Beach, as well as founding several other businesses. He will long be remembered as an entrepreneur and businessman who loved to mentor those looking for an opportunity to get started.

Towers was a firm believer in volunteerism for the community and mankind. He did so selflessly and full heartedly. On snow days when schools were cancelled, he had his family in the Jeep delivering meals to those who might not receive any due to the weather. He volunteered with Miracle Hill, Meals on Wheels, and First Presbyterian Church, where he was a Deacon, Elder, and served on numerous committees. He was a lifelong member of the Kiwanis Club, where he served as past president. He rarely missed a meeting, even while traveling.

Towers loved to travel. He and Claire went on many great adventures, both through business and with family and friends. Some favorites were Alaska, Banff, Arizona, Hawaii, Bermuda, New England and several Windstar Cruises.

One trip, however, was solo, when he chose to go to Anapa, Russia. He spent six weeks volunteering at a model camp where leaders from all over the Soviet Union were trained to open Christian youth camps. Conditions were very rough and somewhat unsafe, but he felt called to go. There he poured concrete and did other construction while providing great support to the workers. This trip impacted his life as much as he impacted those he worked with. Throughout his life, this time held a special place in his heart as he continued to support Christian Missions.

He and Claire also loved to host friends and family at Paramount Cottage in Little Switzerland, NC and at Sandpiper Run in Litchfield. They made it very clear that the door was always open! His absolute favorite, however, was being at the Little House in Pawleys Island with his family. He loved to bodysurf, lie in the hammock, and toast the sunsets.

Towers and Claire spent their final years at the Foothills Community in Easley, SC. There they made many new, dear friends and reacquainted with ones from years gone by. After Claire's passing in January 2018 and until his death, Towers remained very active and involved. He will be missed by the residents, and especially the staff. The family is truly grateful for the love and care they provided.

There will be a family graveside service at Springwood Cemetery Friday, September 10th.

In lieu of flowers, suggested charities are Miracle Hill, Meals on Wheels of both Greenville and Pickens, and Foothills Community, 205 Bud Nalley Drive, Easley, SC 29642.