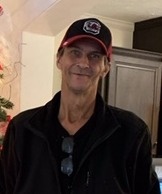 Randy Eugene Marchbanks 60, passed away from this life Monday August 1,2022. Born in Easley, South Carolina, he is the husband of Rita Sanders Marchbanks and the son of the late Robert Marion Marchbanks and Della Rae Nations Marchbanks.

Randy was a  skilled carpenter who loved watersports NASCAR, and attending concerts, his favorite being Lynyrd Skynyrd Skinner.

The family will hold a private service at a later date.

To order memorial trees or send flowers to the family in memory of Randy Eugene Marchbanks, please visit our flower store.