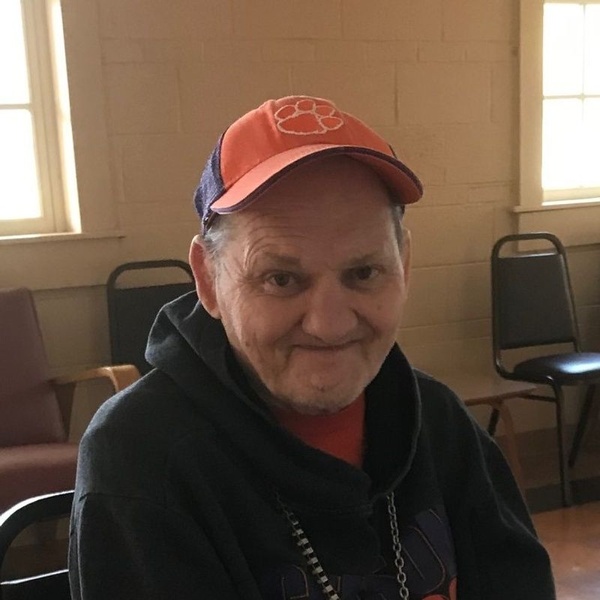 He is predeceased by his father, James H Littleton Sr, his mother Evelyn D Littleton and his brother, James H "Spider" Littleton, Jr. He is survived by his sister-in-law, Jacque Littleton and his extensive family (including Treka, Abby, Latoya, Shelby Thomas and "Brit-Brit"who were especially dear to him) at Whitten Center in Clinton SC, where he was a resident for 50 years.

They tell me he loved to help anyone he thought needed it. Ricky never met a stranger and greeted everyone with "Hey there Buddy!" (whether male or female or however many times he or she passed by). It didn't matter how he felt, when asked how he was he would reply "I'm fine". Occasionally adding, "I wish I had a hundred million dollars!" which was, to him, the funniest thing ever. Ricky loved "church music", Camp Hope (especially Charlie White), CLEMSON TIGERS, Fatz Cafe in Laurens, The Christmas Story movie, strawberry anything and French fries with ketchup. He could shoot a bullseye with a BB gun, keep a yo-yo in play for several minutes, win at Go Fish and High Card (I think we made that up but he thought it was hysterical).

A private graveside service was held at Oconee Memorial Park on Thursday, January 20, 2022.

A Celebration Service to honor the life of Ricky will be held at a later date at Whitten Center in Clinton.

A special thank you to Laurens County Hospital 2 South nurses and CNAs who kept him comfortable during his stays. And a grateful thank you to everyone at Rainey Hospice House in Anderson for making the most difficult time of end of life…bearable.