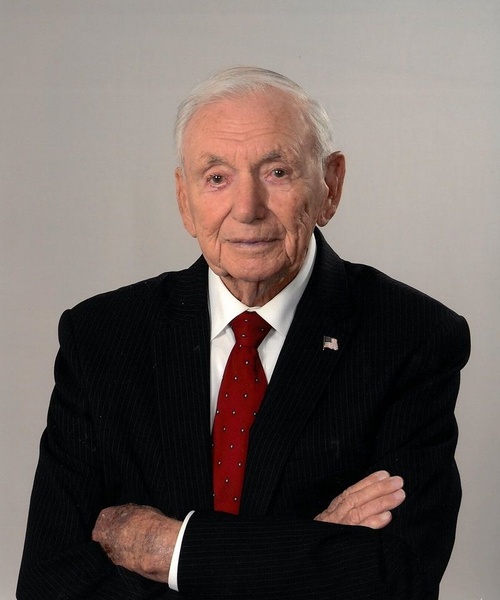 Sidney B. Whitlock, 93, of Liberty, beloved husband of the late Dorothy Elizabeth Smith Whitlock, entered into eternal glory on Wednesday May 26, 2021 after an extended illness.

Born in Six Mile on August 21, 1927, Sidney's life centered around service to God, his country, family and community. An Army veteran, he served in Germany during WWII. After returning home from the war, Sidney worked at Woodside Mills. He then worked for Robinson Funeral Home where he retired after more than 50 years of dedicated service. In his spare time, he enjoyed repairing washers, dryers and other appliances. It was during each of these endeavors where his kindness, generosity and gentle spirit were evident to all who knew him. He was a member of Calumet Baptist Church for over 60 years, where he was a former Deacon and Treasurer. He also was a former trustee for the Pickens County School Board.

In addition to his wife, Sidney was predeceased by his parents, Hershel Bunyon and Margaret "Maggie" Satterfield Whitlock, a sister, Inez Holliday, and brothers, Joe, Ander, Paul and Hershel Whitlock.

The family will receive friends on Saturday, May 29, 2021 from 11:00 AM until 12:45 PM at Calumet Baptist Church, in Liberty, with the funeral service to follow at 1:00 PM, in the church sanctuary. Burial will be in Hillcrest Memorial Park in Pickens.

In lieu of flowers, memorials to honor the life and memory of Sidney Whitlock may be made to Calumet Baptist Church Building Fund, 400 S. Peachtree Street, Liberty, SC 29657 or Pruitt Hospice, 1510 N. Fant Street, Anderson, SC 29621.

Visit RobinsonFuneralHomes.com or Robinson Funeral Home and Crematory-Downtown, Easley.
To order memorial trees or send flowers to the family in memory of Sidney B. Whitlock, please visit our flower store.