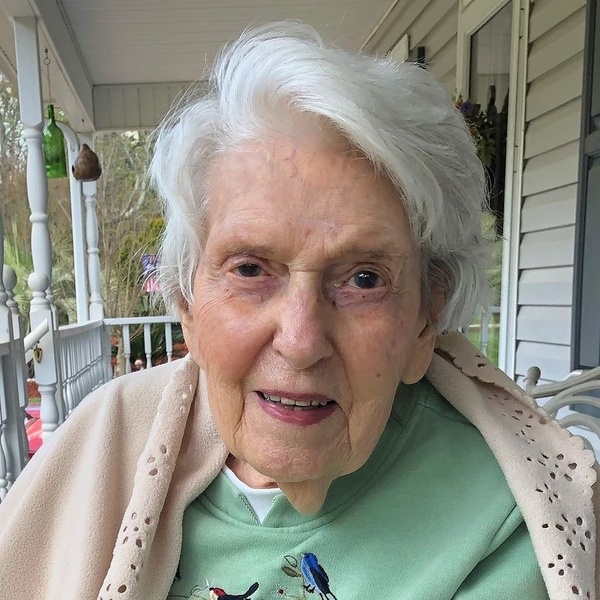 Susie Betsill Smoak, 98, passed away December 16 at Cottingham Hospice House in Seneca, South Carolina. A memorial service will be held at 1:00 p.m. on Thursday, January 6 at Pendleton Presbyterian Church. DUE TO THE COVID-19 PANDEMIC THE FAMILY REQUESTS THAT FACIAL COVERINGS BE USED FOR THE SERVICE IN THE CHURCH.

Susie was born in Orangeburg, South Carolina on December 2, 1923 to Alice Inabinet Betsill and Eugene Joseph Betsill. She grew up on her family's farm in Orangeburg with her older brother, Eugene Joseph Betsill, Jr. and her younger brother, Charles Reedy Betsill. She loved riding and caring for horses, particularly her horse, Bess. Susie was a 1942 graduate of Orangeburg High School and then attended business school in preparation for many fulfilling years of work in banking. Growing up during the Great Depression, she developed resourcefulness, resilience, and good stewardship. She never let anything go to waste and her faith in God helped her find joy even during the most difficult times.

Widowed three times, Susie lost her first husband, Julian Madison Betsill, while only 23 years old and pregnant with their daughter Julie. She was also preceded in death by her second husband John Laird Paul in 1966, and third husband Julien Jervey Smoak, Jr. in 1999. She is also predeceased by her older sisters Pauline Betsill, Pearle Betsill Hewitt, and Lurline Betsill Clarke.

She worked in banking for many years, first at American Bank & Trust in Orangeburg and later at Home Federal Savings & Loan in Bamberg, where she continued to work part time until she was 91 years old. She was a member of the Bamberg County Hospital Auxiliary, served as Moderator of the Board of Advisors for the Presbyterian Home of South Carolina, and was a ruling elder of Bamberg Presbyterian Church where she was an active member until the church closed. She then began attending Trinity United Methodist Church around 2004 and became active in the congregation there. Upon retiring from her work at the Savings & Loan, she lived at The Oaks of Orangeburg for five years before moving to the Upstate in 2019. For the last eight months of her life, she lived at home with her daughter Julie in Clemson.

Susie's family and friends will remember how much she enjoyed cooking and baking for those she loved. Sourdough bread, grits with tomato gravy, pound cake, and crème brulee were a few her specialties. She loved inviting friends and family into her home, but also regularly cooked breakfast to share with her coworkers at the Savings & Loan. She enjoyed various arts and crafts but was particularly talented at painting china both with gold monograms and with subjects such as birds. She loved feeding and watching birds, and they often inspired her artwork, whether she was painting a china pitcher or drawing a little pencil sketch to mail to one of her great-grandchildren. She also loved playing a game of Rummy, checkers, or occasionally Pick-Up-Sticks with her family, especially with the children. Her happy place was the Smoak river cottage at Edisto Bluff where she enjoyed many hours of fishing, cooking, and entertaining friends and family. She read her Bible and prayed for her loved ones every day and found beauty and joy in all her 98 years on Earth, even the hard ones.

The family wishes to express their gratitude to Susie's caregivers who made it possible for her to continue living at home with Julie, and to those who cared for her at Cottingham Hospice House during her final days.

In lieu of flowers, memorials may be made to Pendleton Presbyterian Church at 603 S. Mechanic Street, Pendleton, SC, 29670. Memories and condolences may be shared online at www.robinsonfuneralhomes.com or at Duckett-Robinson Funeral Home.
To order memorial trees or send flowers to the family in memory of Susie B. Smoak, please visit our flower store.