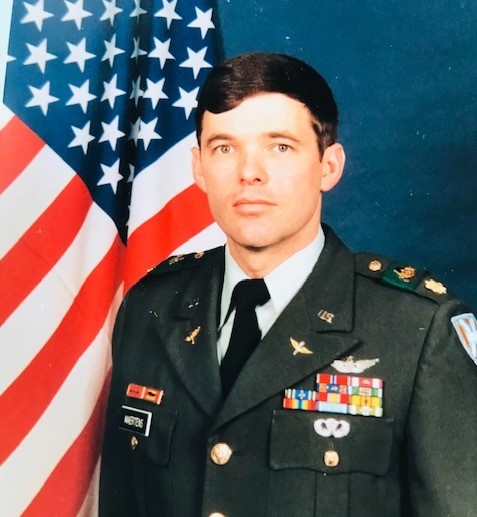 Lt. Col. Maertens’ distinguished military career included overseas assignments to Vietnam and Germany. He served over 23 years in a variety of command and staff positions with the Field Artillery Branch, Transportation Corps, Aviation Branch, and as a professor at the United States Military Academy. Following graduation from West Point, Tom Maertens was assigned as a Forward Observer with the 82nd Airborne Division, Fort Bragg, NC. After completion of the Rotary Wing Aviation Course and subsequent specialization on the AH-1G Cobra, he was assigned to the 9th Air Cavalry Division in Vietnam where he flew both the Cobra and UH-1H Huey and earned the Bronze Star. Upon returning from Vietnam, he joined the 101st Airborne Division at Ft. Campbell, KY, serving as both a Fire Direction Officer and then the Battalion Maintenance Officer.

Tom was assigned next to Ft. Rucker, AL, to serve as a Test Project Officer as well as a test pilot with the Army Test and Evaluation Command. He was the Program Manager for the developmental testing on the AH-1S Cobra, a critical aircraft for the future of Army Aviation.

In 1980, Tom completed a Master’s Degree in Geography at the University of Tennessee in Knoxville. He then returned to his alma mater in New York to teach a diverse selection of courses in the Department of Geography and Computer Sciences. He was promoted to Assistant Professor and given responsibility for elective courses on Remote Sensing and the Geography of North America. In addition, he developed and taught the first course on meteorology at the United States Military Academy.

In 1983, he returned to Ft. Eustis, where he served in the Directorate of Combat Developments in the Aviation Logistics School. He completed the Command and General Staff College requirements from this location. During this tour, Tom was recognized for his volunteer services to the county as a firefighter and EMT.

Lt. Col. Maertens traveled to Mannheim, Germany, in 1985 to serve as the Airfield Operations Officer for the busiest Army airfield in Germany. His wife Karen joined him shortly thereafter. After a year he was selected to command the 207th Aviation Company in Heidelberg, which provided aviation support to military operations in the theater. His unit was awarded the annual Sword of Freedom Award for overall maintenance in US Army Europe and Tom was awarded the coveted wings of a Master Army Aviator. Nevertheless, the highlight of the tour in Heidelberg was the birth of daughter, McKenna Elise.

After returning stateside, Lt. Col. Maertens pursued a PhD in Geography at the University of Tennessee in preparation for a return to West Point as a Professor where he implemented the new environmental geography program. He also served as the Commandant’s Representative to the Army Rifle Team, which he had competed on as a cadet. Tom closed out his distinguished Army career at West Point in 1992 and was awarded the Legion of Merit.

Upon retirement from the Army, Tom relocated his family to Knoxville, TN, where he worked for an environmental engineering firm inspecting hazardous waste sites. He also spent a year teaching OSHA compliance courses for Rural Metro in Knox County. After three years, he returned to his beloved West Point as a Major Giving Officer for the Association of Graduates. He continued this new career in university development for the College of Agriculture, Forestry, and Life Sciences at Clemson University, and later at the College of Charleston. His gregarious personality was a true asset to these institutions as he traveled the state and country to meet with distinguished alumni.

Throughout his life, Lt. Col. Maertens was very active in the community, from his youth as an Eagle Scout to serving as a volunteer firefighter/EMT for over 40 years. He volunteered with numerous rescue squads and fire departments; most recently Salem Fire and Rescue and before that the Clemson University Fire Department. He truly believed in “Service Before Self”. In addition, Tom Maertens belonged to the Clemson Rotary Club, which hosted the annual Oyster Roast fundraiser for many years. This popular event was often highlighted by the “Happy Daze,” his rock and roll band that was formed when he was a West Point cadet and has continued to play small events, weddings and West Point reunions over the years. As the drummer, his love for music was appreciated by all.

His zest for life, love of country and family, and infectious personality were evident in all that he did. He served his country with distinction; he exemplified the ideals of West Point: Duty, Honor, Country.

A memorial service will be held at Holy Trinity Episcopal Church, 193 Old Greenville Highway, Clemson, SC, on Tuesday, 14 June 2022 at 2:00 PM. The family will receive visitors in the Parish House following the service. The final resting place will be the West Point Cemetery, United States Military Academy in New York at a later date.

In lieu of flowers, the family requests that donations be made to Holy Trinity Episcopal Church; Salem Fire and Rescue, PO Box 21, Salem, SC 29676; or a charity of one’s choosing.