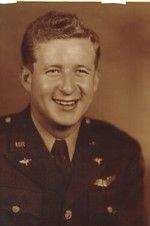 Born May 1, 1924 in Pickens, Mr. Mauldin was a son of Wayne Fulton and Josephine Boggs Mauldin, and was a member of Pickens Presbyterian Church. Following graduation from Pickens High School, Class of 1940, he enrolled in The Citadel, Class of 1944, until he and his class were activated into military service. He trained as a fighter pilot and became a Captain in the United States Air Force. During World War II, he flew numerous missions in the European Theatre and he was stationed in Rothwesten near Simmershausen, Germany following the end of the war.

During the Korean Conflict, Captain Mauldin was a member of 45th Tactical Reconnaissance Squadron stationed at Kimpo Air Force Base, South Korea. On February 21, 1952, Captain Mauldin was piloting an RF-51 Mustang, which departed from Kimpo Air Force Base on an aerial reconnaissance mission in search of enemy targets. His plane was shot down near Sinan-ri, Hoeyang County, North Korea. An aerial Search and Rescue Operation ensued and continued through the following day, but no evidence was found that Captain Mauldin was able to escape from the aircraft prior to its impact. On November 30, 1993, through cooperative efforts between North Korea and The United Nations, 33 coffins containing unidentified remains reportedly belonging to U.S. servicemen listed as unaccounted for were turned over. Captain Mauldin's remains were positively identified on February 11, 2008, after many years of scientific analysis by Joint POW/MIA Accounting Command, Hickham AFB, Hawaii and Mitochondrial DNA testing completed by Armed Forces DNA Identification Laboratory, Rockville, Maryland. Captain Mauldin's awards and decorations included the Purple Heart, Air Medal with One Oak Leaf Cluster, World War II Victory Medal and Korean Service Medal.

Graveside funeral services, with full military honors, will be 11:00 A.M. Friday, July 18, 2008, in the Veterans Garden of Honor at Robinson Memorial Gardens, 1425 Powdersville Road, Easley. The family will receive friends immediately following the service at the graveside.

Condolences may be expressed online at www.robinsonfuneralhomes.com or in person at Robinson Funeral Home-Powdersville Road, who is assisting the family.
To order memorial trees or send flowers to the family in memory of William Kennedy Mauldin, please visit our flower store.