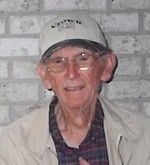 Born in Easley, he was a son of the late Samuel A. and Frances Lark Sheriff, a life-time farmer, a member of St. Paul United Methodist Church and a WWII veteran of the US Army Medical Corps.

In addition to his parents, he was predeceased by one grandson; three brothers, Sam Lark Sheriff, Thomas A. Sheriff and Charles Sheriff; and one sister, Johnnie Mae Gillespie.

Funeral services will be 2 PM, Tuesday in the chapel of Robinson Funeral Home-Downtown with Rev. Clyde Gravley Jr. officiating.

Visitation will be from 1:00 to 2:00 PM, Tuesday prior to the service at the funeral home.

Condolences may be expressed online at www.robinsonfuneralhomes.com or in person at Robinson Funeral Home-Downtown, which is assisting the family.
To order memorial trees or send flowers to the family in memory of William Morgan Sheriff, please visit our flower store.